I will never be mistaken for being a fan of either Sean Avery or the New York Rangers.  However, when I saw that advance review copies were available of his new memoir, I had to read it for curiosity.  After reading it, I am still not a fan - but it was a good book.  Here is my review of "Ice Capades." 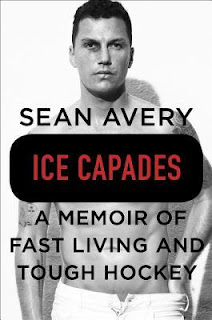 Rating:
4 of 5 stars (very good)
Review:
Sean Avery was a very polarizing figure when he was playing in the NHL. Fans would love him (especially if he was playing for their favorite team) or hate him.  He had a few controversial moments.  He loved living the high life, whether it was parties, women or fashion.  He covers his hockey career both on and off the ice in this memoir written with Michael McKinley.

This memoir is different than the typical sports memoir for several reasons.  The biggest difference is that nearly the entire book is dedicated to his professional hockey career.  There is very little space devoted to his childhood or teenage years and aside from his wedding to supermodel Hilary Rhoda, there is very little post-hockey life covered as well.  So, if it is hockey the reader wants, the reader will get it as Avery writes about his ups and downs with the Detroit Red Wings, his experiences on and off the ice in Los Angeles playing for the Kings, his absolutely miserable brief stint with the Dallas Stars and finally his favorite part of his career – the time he played for the New York Rangers.

Avery was known for a few controversial incidents and he talks about them with candor. He does defend himself for not only the well-publicized ones, such as the vulgar remark made in Dallas when trying to trash talk to another player, but for others not as well known, such as selling his complementary tickets to a ticket broker who in turn put them out on the market.  He also talks about the “Avery Rule”, laughing about the fact how a non-superstar player like him can rattle a legendary goalie (Martin Brodeur) so much that a rule was made with his name prohibiting facing the goalie in order to screen him.

If reading about the party life that Avery had that the reader wants, he or she will be in for a treat, as there is plenty of material on that as well.  He especially writes about that during his stint in Los Angeles, where he describes many of his experiences with clarity. It was there where he first mingled with the famous and even his first serious relationship was with a celebrity – actress Rachel Hunter, who was married to Rod Stewart before dating Avery.  Through the book, especially in Los Angeles and New York, he does some serious name dropping of celebrities he has encountered.

Reading about a lot of these parties started to get boring, but once he got to New York, the book is a much better reading experience.  While I have never been a fan of Avery or the Rangers, it is clear how much Rangers fans love Avery and in turn he loves them and the city back.  He got serious about wanting to put roots down in New York and made serious plans for running a business and getting into the fashion industry once he was through with hockey.  This is something many professional athletes neglect and wind up struggling with finances.  Avery instead made sure this would not happen and at the same time, he settled down with a woman who he truly loved and loved him.  It isn’t right to say that he matured as the book progressed, but by the end it was clear Avery was a different man than the hard playing, hard partying person he was in Detroit and Los Angeles.

The aforementioned fans who love Avery will want to pick this book up as will Rangers fans.  For those like me who are not big fans of him, the book is still one that is worth the time as it is entertaining, gives an inside look at life both on and off the ice.

I wish to thank Blue Rider Press for providing a copy of the book via NetGalley in exchange for an honest review.