Review of "The Streak: Cal Ripken, Lou Gehrig and Baseball's Most Historic Record"

Most baseball fans  will recall the moment that Cal Ripken passed Lou Gehrig and became baseball's "ironman."  It was a celebration of both men and what they meant not only to baseball but to the honorable action of showing up to work every day.  This book is a wonderful tribute to both men and others who have had similar streaks of playing in many consecutive games.  Here is my review of "The Streak." 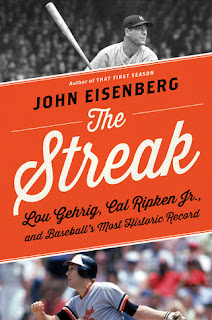 Title/Author:
“The Streak: Cal Ripken, Lou Gehrig and Baseball’s Most Historic Record” by John Eisenberg
Tags:
Baseball, history, Orioles, Yankees
Publish date:
July 4, 2017
Length:
320 pages
Rating:
4 ½  of 5 stars (excellent)
Review:
On September 6, 1995, Cal Ripken broke the record for consecutive major league baseball games played. The moment provided the sport with a much-needed boost after a strike wiped out the last six weeks and all of the postseason the previous season. The road to this moment for Ripken, as well as the streak that Lou Gehrig had to set the record broken by Ripken, is chronicled in this well written and well researched book.

John Eisenberg, a well-respected sportswriter who covered the Orioles for the Baltimore Sun, provides insight into Ripken that only one who covered him for most of career would know. Some of the details can give insight into Ripken’s competitive streak and fury - such as his not-so-sterling reputation among umpires - and his unwillingness to keep the streak alive through actions such as pinch-hitting or starting a game in the field and being removed for a pinch hitter before his first at-bat.

These two actions are ways that some other players kept similar streaks alive and many of those players who had such streaks are discussed in the book as well.  While not as lengthy as the sections on the two main players of Ripken and Gehrig, the information that the reader will gain on other players who had long streaks such as Everett Scott, Billy Williams and Steve Garvey will be valuable as well.  Also, the sections on Gehrig illustrate the detail with which Eisenberg writes as the reader will believe that he covered Gehrig for a newspaper beat as well as Ripken.  Those passages were just as informative for a reader as those on Ripken.

Overall, this book was a very interesting one to read. The chapters alternated between Ripken, Gehrig and the other “ironmen” which made it a bit of challenge to read for me as that resulted in choppiness for me. But that issue was very minor in the overall appraisal of the book and it was one that any baseball fan will enjoy reading.

I wish to thank Houghton Mifflin Harcourt for providing a copy of the book via NetGalley in exchange for an honest review.