It was time to find a good boxing book as it has been awhile since I read one - and lo and behold, what comes across my list of recommendations on NetGalley but this one?  I had never heard of Madame Bey's camp, but when reading the description and all the boxers that trained there, I had to pick it up.  That turned out to be a very wise decision.  Here is my review of "Madame Bey's: Home to Boxing Legends." 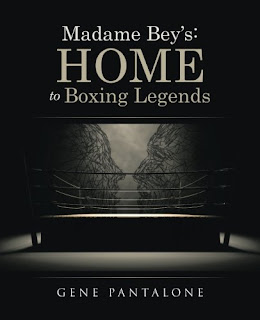 Review:
The town of Chatham, New Jersey may not be well-known now, but in the early 20th century, it was home to the training camp of many championship boxers. This camp was run by a woman known as Madame Bey, an immigrant from Turkey who had previously worked in Washington with her husband for diplomatic duties and also had aspirations to be an opera singer.  Instead, life led her and her husband to Chatham and the development of a boxing camp.

The story of Madame Bey and many of the championship fighters she called “her boys” is captured in this book by Gene Pantalone. Two aspects of the story will grab the attention of the reader immediately.  One is the successful business Madame Bey runs at a time when there were very few female entrepreneurs. The second is the sheer number of legendary fighters who trained at her camp.  From Mickey Walker, the welterweight champion who was as famous for his art as well as his fists, to Max Schmeling, the German heavyweight champion, the camp became known as one where champions would train.

Pantalone weaves stories about the fighters who would train there along with Madame Bey’s story as well.  The bulk of the book is about her boys, with some of the best writing and research done on Walker (who Madame Bey called her favorite) and Gene Tunney.  The camp thrived despite competition in the area as word of mouth from the fighters was very good.

Many don’t think of boxing as a sport that will elicit emotions of compassion, there is a passage in the book that captures that as well, and it is one of my favorite parts of the book. The camp was heavily damaged by a fire and Madame Bey did not have the funds or enough insurance to completely rebuild. However, many boxers who were training there pitched in to rebuild the complex and she was back in the training business within months.  The love for her by these fighters to do this for her was amazing.  The reader will be captivated by this and many other passages of emotion as well as fighting.

While lengthy and occasionally a slow read, the research and detail presented paint a great picture of the sport and the fighters of that era. This book is not only recommended for boxing fans, history buffs and readers who just want a story about a successful woman in business will also enjoy this one.

I wish to thank Archway Publishing for providing a copy of the book via NetGalley in exchange for an honest review.