Review of "Soccer Without Borders"

Having just returned from a seven-day cruise, I am doing the same thing as when I started this blog three years ago this week - I am posting reviews on consecutive days on books that I read on the cruise.  I have found cruising not only a relaxing vacation, but also a time when I can do a lot of reading.  The first post-cruise review is on a book coming out Tuesday on the coach of the United States men's soccer team.  An outstanding book on a man who has a grand vision and plan for US soccer, it is one that I highly recommend.  Here is my review of "Soccer Without Borders." 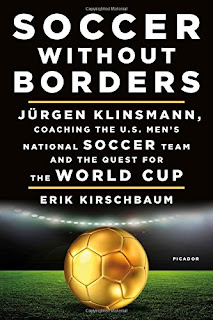 Review:
Jurgen Klinsmann took the 2014 United States Men’s World Cup team to an unexpected run to the round of 16 and in the process became a well-known name in soccer circles in the country. However, he was well-known previously for his career as both a player and a coach in Germany, Italy and England and was noted for his non-conventional views for coaching. His career and his vision is wonderfully captured in this book by journalist Eric Kirschbaum.

The book reads as part biography, part coaching manual and part soccer history lesson. Kirschbaum does an excellent job of covering each part of Klinsmann’s career.  He also tells of Klinsmann’s desire to not just live a comfortable life in the United States and adapt to its norms for the sport.  Klinsmann’s vision and hopes for making the United States a powerful team in the sport is portrayed as well, if not better, than any previous publications I have read on his coaching of the team.

Fans of international soccer will replay some of his greatest moments such as his overhead bicycle kick for Stuttgart in 1987 and his excellent play in the 1990 World Cup final, leading his West Germany team to the victory over the Netherlands. His coaching overseas is well-documented as well, making the reader possibly believe he or she is reading a biography.

However, the book is much more than that, and Klinsmann’s work with the United States team is the best reading in the book.  His unpopular decision to leave Landon Donovan off the 2014 World Cup is one example of this type of work – Klinsmann’s non-conventional and well-written explanation was very good; as was the vision he has for soccer in the United States.

Here there are more unconventional thoughts, such as the biggest professional league in the country, Major League Soccer, have relegation for the worst teams to lower leagues.  This is done in Europe, but not in the United States because of the sports culture here.  Again, the explanation why this should be done, as well as his other ideas, is thought-provoking and will make the reader ask why it is not already in effect or taking place.

Soccer fans of all levels, from casual to hard-core, will enjoy this book about the coach who hopes to bring the United State to success in a sport where it has been lagging behind the rest of the world for a long time.  It is one that is highly recommended to be part of a reader’s library.

I wish to thank Picador Publishing for providing a copy of the book via NetGalley in exchange for an honest review.