Review of "A Well Paid Slave"

Some events that are historical for a sport are not made on the playing field.  In baseball, one of these was a Supreme Court decision filed by a player who had nothing to gain and everything to lose by doing so.  If you have not heard of Curt Flood, then by all means you should read this book.  If you have, you will enjoy reading this account of the man and his case against Major League Baseball. 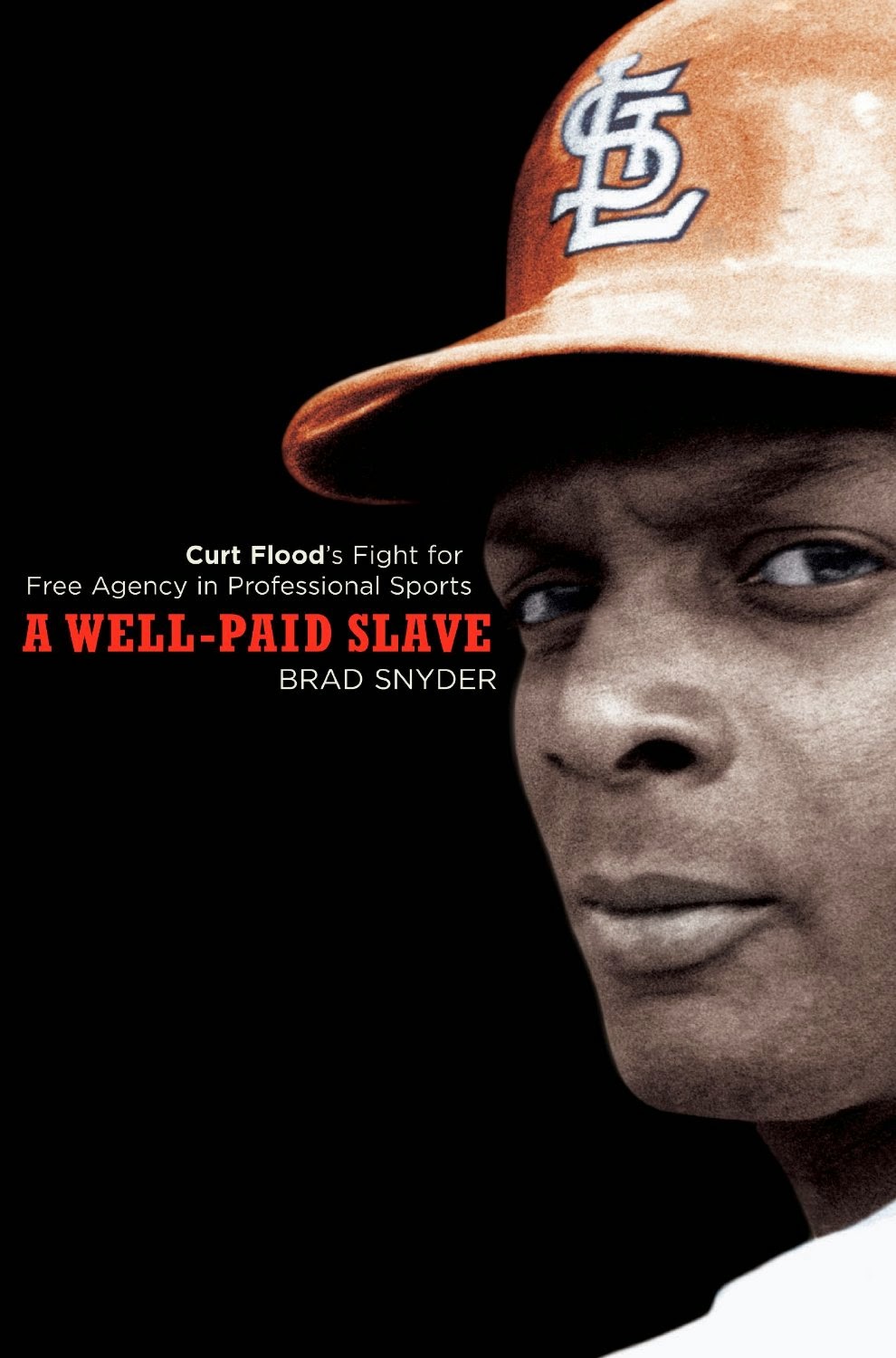 Review:
In early 1970, Curt Flood, an all-star outfielder, was part of a multi-player trade between the St. Louis Cardinals and the Philadelphia Phillies. Having established himself in the city with both business and on the Cardinals, Flood refused to report to the Philles and wanted to remain with the Cardinals.  However, because of baseball’s reserve clause that tied a player to a team until he was traded, released or sold to another club, Flood had to report to Philadelphia if he wanted to play baseball in the 1970 season.

Instead of doing so, he sought legal advice and also financial backing from the players’ union and decided to sue Major League Baseball. By doing this, he knew he had little to gain ( he was giving up a $90,000 annual salary, one of the highest in baseball at that time) and a lot to lose. But he was willing to take that risk in order to stand up to a principle.

The resulting legal case, which went all the way to the Supreme Court, and Flood’s life both in and out of baseball are portrayed in this excellent book by former attorney Brad Snyder.  Ironically, Snyder also quit HIS job in order to research and write this book.  While it is not known if Snyder had the same professional and financial difficulties that Flood faced after quitting baseball, his knowledge of the legal system aids in making this book a good detailed account without legal language or compound sentences making it harder.

The book is at its best when it portrays Flood as a man with principles who just wants to end the practice of binding players to one team unless the owner sees fit to discard him in whatever manner is best for the owner. In addition to the court cases, Snyder recaps much of Flood’s baseball career and how it hardened him so that he was prepared to face the risks of suing Major League Baseball.  In one excellent chapter on Flood’s minor league playing days in the South, the prejudice Flood faces is not unlike that which Jackie Robinson endured when he broke the color barrier.  Robinson was an inspiration for Flood in both baseball and civil rights matters and it is stated so several times in the book.

Flood’s life falls to pieces after his baseball playing days are done and the Supreme Court rules against Flood.  His financial problems, drinking problems and relationship issues are documented well, but not too much in order to preserve the main focus of the book – how Flood opened the door toward the eventual demise of the reserve clause in 1975.

Snyder’s legal expertise was also evident in his excellent coverage of the actual hearing in front of the Supreme Court. Snyder is especially critical of Flood’s attorney Arthur Goldberg’s presentation in front of the justices by basically saying that the true reason that the reserve clause should be abolished was never truly expressed by Goldberg.  That part is by far the best of the legal writing in the book.

This book should be read by not only fan, but modern-day baseball players in order for them to truly appreciate what Flood did and sacrificed for them.  The multi-million dollar contracts that are common for even regular players today would not have been possible without one man challenging the sport not for selfish reasons, but just because he felt it was the right thing to do.

Did I skim?
No, because skipping over any portion of this book would mean the reader would miss key facts or elements crucial to Flood’s case against baseball.

Pace of the book:
I found the first third of the book rather slow and hard to concentrate as it mainly concentrates on Flood’s case in the lower court.  However, once it gets to the Supreme Court, the book reads much faster for all topics – the legal matter, Flood’s baseball career and his life.

Do I recommend?
An absolute must-read for any sports fan who wants to understand the background of how players were able to obtain the freedom to go to any team – not just in baseball but for all team sports.