Review of "Off the Ropes"

When searching for my next book, I stumbled across this gem when searching boxing books.  When I read that it was about Ron Lyle, I was very happy as it is hard to find books on fighters such as him who didn't win a championship but was a very good boxer in an era where there were many great fighters.  Here is my review of his biography, "Off the Ropes." 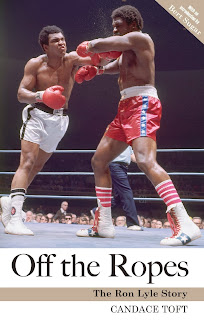 Title/Author:
“Off the Ropes: The Ron Lyle Story” by Candace Toft

Review:
Ron Lyle is a name only serious boxing fans would recognize today.  He did not win a heavyweight title during his career.   He had what many would be considered a troubled life because he was convicted of murder at a young age, later would be acquitted of another murder charge, divorced twice and never truly fulfilled his goal of becoming a champion.  However, he does not regret what turns his life took and talks about everything, the good and the bad, freely with author Candace Toft.  The result of this is a fascinating book about his life that is a terrific insight into the man and what made him tick.

Hard core boxing fans may be disappointed with the boxing portions of the book as Toft does not describe Lyle’s fights, including his most famous bouts against Muhammad Ali and George Foreman, into great detail.   She does write enough about them that the reader will get a feel of what happened in the ring during those fights, but there isn't a blow-by-blow recap or many exchanges between fighters or fighter and corner men.

Those, however, do not take anything away from the rich stories told by family members and Lyle himself about his time in prison, his dedication to family, his marital triumphs and failures, and most importantly, Lyle’s fierce commitment to his goal of fighting for the heavyweight championship.  The reader really does feel like he or she is sitting next to Lyle and knows the man personally from the details written about these topics.  What is very intriguing to me is that to this day, Lyle will not share any details about the incident that resulted in his murder conviction.  His account did not sound like a man who would commit such an act, yet it also doesn’t exactly sound like something a defense lawyer would use in order to get a client acquitted.  Lyle accepted this verdict, did his time and became focused on his boxing goals with the help of two men who were willing to take him under their wings.

I also liked how Toft wove this focus into the other aspects of Lyle’s life.  She explains how this focus on his boxing career contributed to his marital problems, his demanding training regiments but yet he would never forget that family was important.  He comes across as a loving father despite problems with his wives and fiercely loyal to his mother and siblings.   Overall, this is an outstanding biography on a boxer who may not be a household name today, but has a story that is worth sharing.  Highly recommended for any boxing fan.

Pace of the book:
Excellent.  While the book may have lacked specific details about parts of Lyle’s life, the stories told by the many people interviewed made it an entertaining and fast read.

Do I recommend?
Yes.  Fans of that era of boxing or boxing history buffs will enjoy reading about this fighter who engaged in a very memorable fight for his moment of fame in the boxing ring.