Review of "The Winter Classic"

Have you noticed that the biggest sporting event on New Year's Day is no longer one of the college football bowl games?   It is now a regular season hockey game, the NHL's Winter Classic.   This is a review of a book on this "new" New Year's Day tradition. 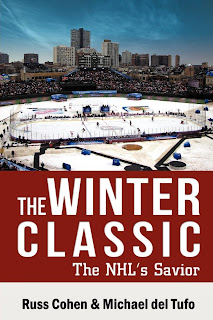 
Review:
This book was okay but disappointing in several ways.  It contains too many editing errors.   I counted five typographical errors in the book.  The pictures that were included in the electronic version were negatives, not the photos.


It has most factual items correct and these were nicely done since the authors experienced them. However, a glaring mistake is one about the next Winter Classic in 2014.  It states that the game between the Detroit Red Wings and Toronto Maple Leafs will feature teams in different conferences.  This is incorrect.  The NHL is realigning and the teams will now be in the same conference.  I mention this because the book was written and published after the realignment was announced.


The book's structure makes it easy to follow.  For each Winter Classic game, there is a narrative about the venue, why it was chosen, the politicians and NHL officials talking about the location.  This is one section of the chapter.  Next are interviews with players about playing at such a site.  Then the recap of the game itself, a rundown of the rest of the season for both teams and what is coming next.   These make for an easy means of looking up information in the book.  However, I felt there was inconsistency with the writing style.  Sometimes more emphasis was placed on describing the venue, other times it was on the game itself.  I felt that this made reading the entire book challenging.   This wasn't aided when there were extra sections in the chapters for the 2011 and 2012 Winter Classics when HBO also was filming footage about the participating teams.


Overall, I thought that while the book had its good points and entertaining moments, I felt that there was room for improvement and a more complete accounting of all outdoor NHL games to this point would have been better.  It isn’t a bad read – I did enjoy parts of the book – I just closed the book hoping for more.

Did I skim?
Yes.  I wasn’t interested in reading about the two times that HBO featured the two participating teams, as mentioned in the review. I did read some of the first chapter on this topic, when the Penguins and Capitals were on the show, but grew tired of it and skipped over the last few paragraphs of that chapter.  Then when the Flyers and Rangers were featured and the authors wrote about them, I skimmed really quickly through that portion as well.  I didn’t completely skip it in case there was something interesting to learn, but I didn’t read much of this section either.


Did I learn something new?
Yes.   The reader will learn just how big the event has grown in the five years it has been in existence.  I also learned what some of the other side events take place other than just the hockey game, such as the skating rinks and fan festivals that are going on in the days leading up to the Classic.


Pace of the book:
Good for the most part.  Again, I only felt like it dragged during the sections about HBO.


Positives:
I did like learning about each venue and what extra attractions and activities they featured to engage fans and to make the experience fun for fans and players alike.   The authors experienced this for themselves and it showed as a reader can see the joy they had in participating in these events.


Negatives:
The worst of these have been mentioned in the review (typos, lack of information on Heritage Classic games, and the upcoming Detroit-Toronto Classic), so I will not rehash them here.


Do I recommend?
Yes.  Despite the number of stars, I do believe hockey fans will enjoy at least parts of this book.  For those who were interested in the HBO shows but didn’t get to see them, those chapters do a good job of detailing the contents of the show.    I would also recommend for those interested in purchasing this book to buy the paperback version as the pictures in the eBook were of poor quality.